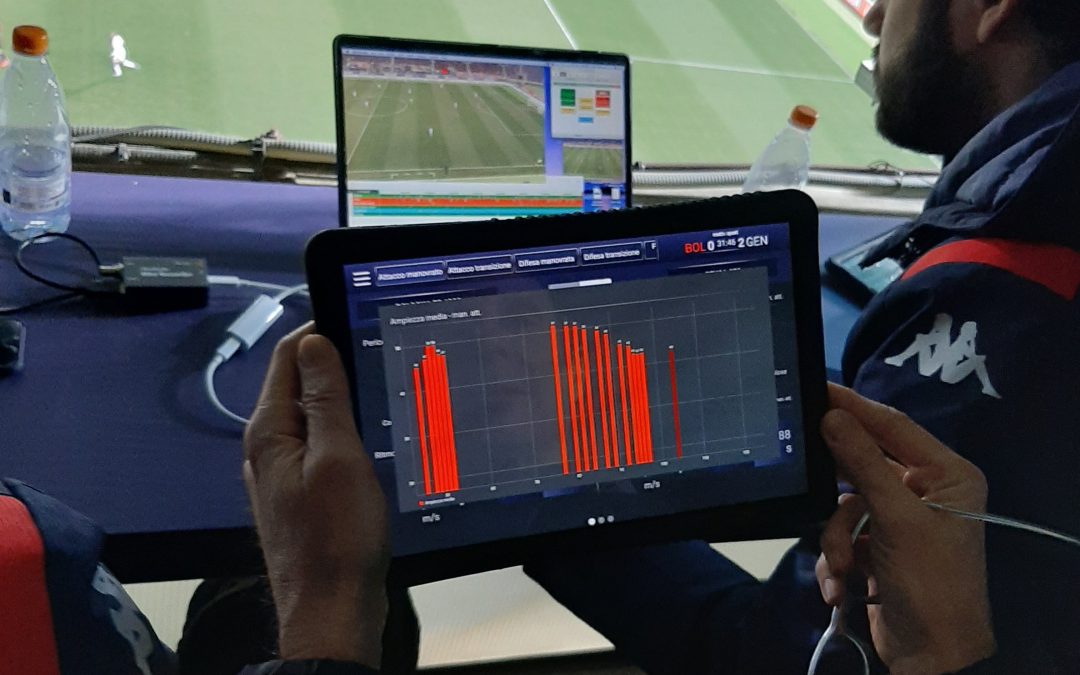 Initially, the data to be monitored with greater attention by the teams were those relating to the length and width of the team on the court, during  the game in real time. Being able to have the live statistics of these parameters has allowed the coaches to see even the slightest disconnect between the players, a signal of a team that is about to suffer, and to think of immediate corrections.

Each of the matches selected for the pilot phase was anticipated by a meeting to introduce the use of the tool in real time, in which the coaching staff of the teams had the opportunity to begin to understand how to exploit its full potential during the 90 minutes of play.

Each team has its own, precise, working methodology and a unique way of  making the components of its coaching staff interact.

Virtual is designed to fit into these dynamics in a natural way, supporting the decisions of coaches and analysts, and providing them with real-time reading keys in the form of practical and intuitive alerts. For this reason, aligning our data analysts to the work flow of the staff of each team involved is a fundamental step towards mutual final satisfaction.

Our data analysts joined the staff of Bologna and Genoa during the meeting between the two teams, held on February 15 at the Dall’Ara stadium.

The game ended with a 3 to 0 victory for Genoa, who catch Bologna by surprise.

The progress of the first part of the match was the mirror of the different mood between the two teams, with an offensive and maneuvering Bologna, and a Genoa all in his half-court and ready to start a counterattack after recovering the ball. 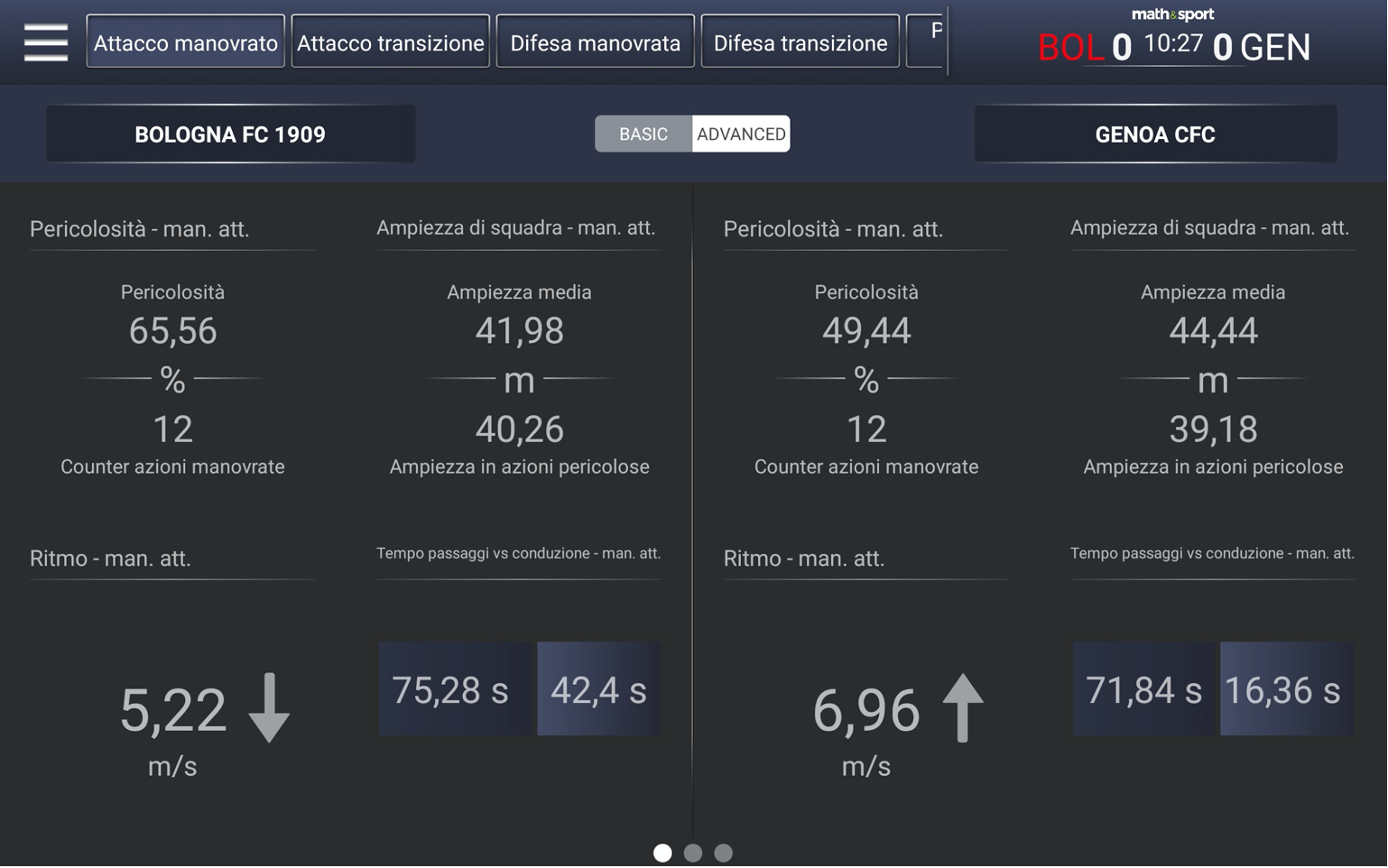 In the first 10 abundant minutes both teams made several maneuvered attacks, but it was Bologna that was on average more dangerous.

The danger index rewarded the home team, despite having kept a slower pace than Genoa.

This was determined by the tendency of Bologna to lead the ball much more unlike a Genoa that made it pass faster, often relying on Pandev ability to make flank plays.

The injury of the Macedonian , which occurred after a few minutes, disrupted the plans of Mr. Nicola, who trusted in his ability to keep the team high, protecting the ball.

The result was an intensification of the pressure of Bologna, it should be noted that, since the exit of the Pandev and as long as the game was in numerical parity, the danger in attack actions in transition tended to increase with a constant trend for Mihajilovic’s men. 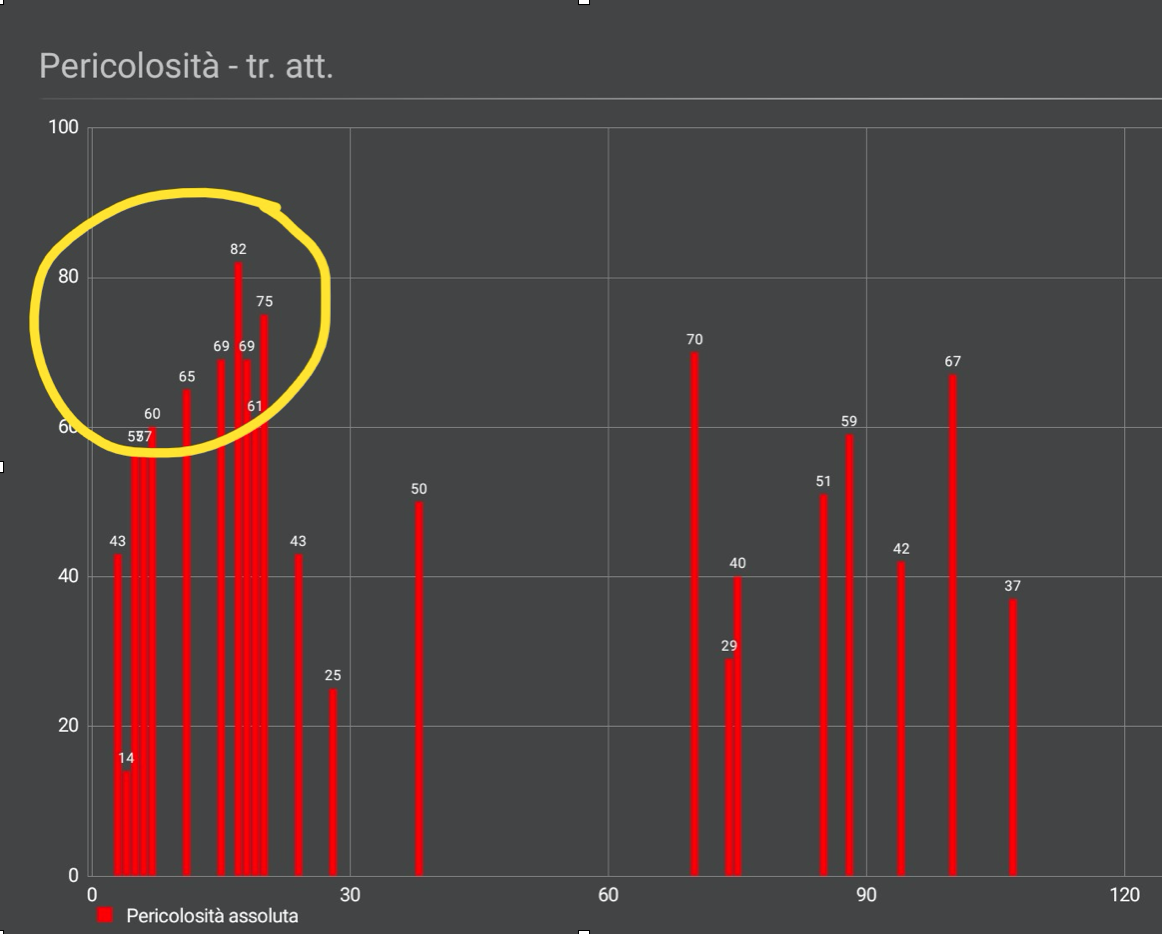 However, after Schouten’s expulsion, at the 34th minute the danger decreased and attack transition actions occurred less frequently.

The same value then, during the second half (right side of the graph) will record real dangerous attacks by Bologna, interspersed with moments in which the team is not dangerous at all, this is the result of a great effort made outnumbered.

The goal of Genoa’s advantage, signed by Adama Soumaoro in the 28th minute and the expulsion of Schouten a few moments later definitively changed the progress of the match. Bologna – Genoa, therefore, was characterized by a first half in which the teams have often changed their tactical approach to the game. Trends recorded, anticipated and, sometimes, also impressed by the Virtual Coach data that the staff reported to the coaches in real time.

The following graph shows how in the second part of the fraction, Bologna decreased the danger linked to the maneuvers, recording a tendency to verticalize too quickly towards the offensive players. This trend is certainly aggravated by the disadvantage and numerical inferiority. 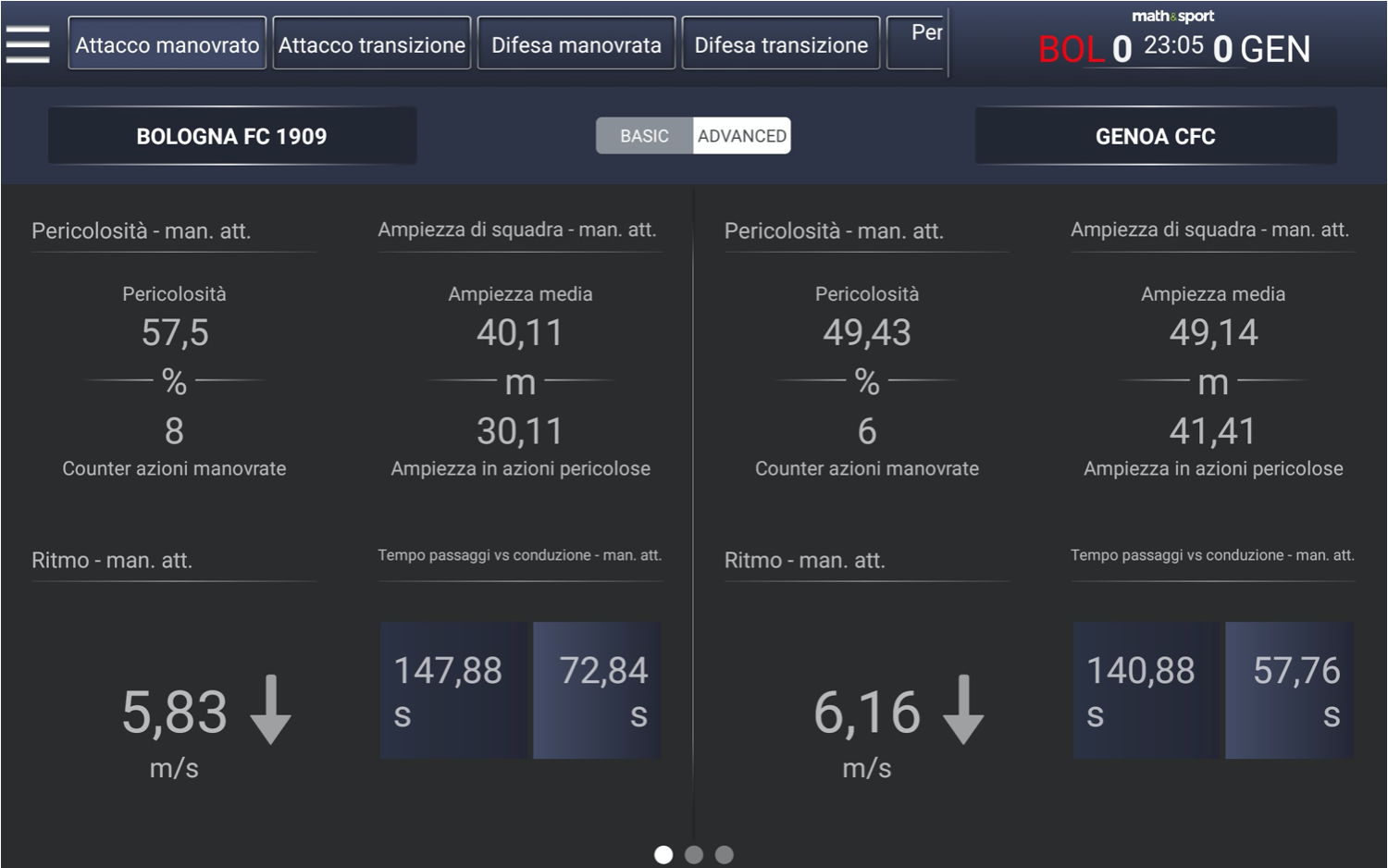 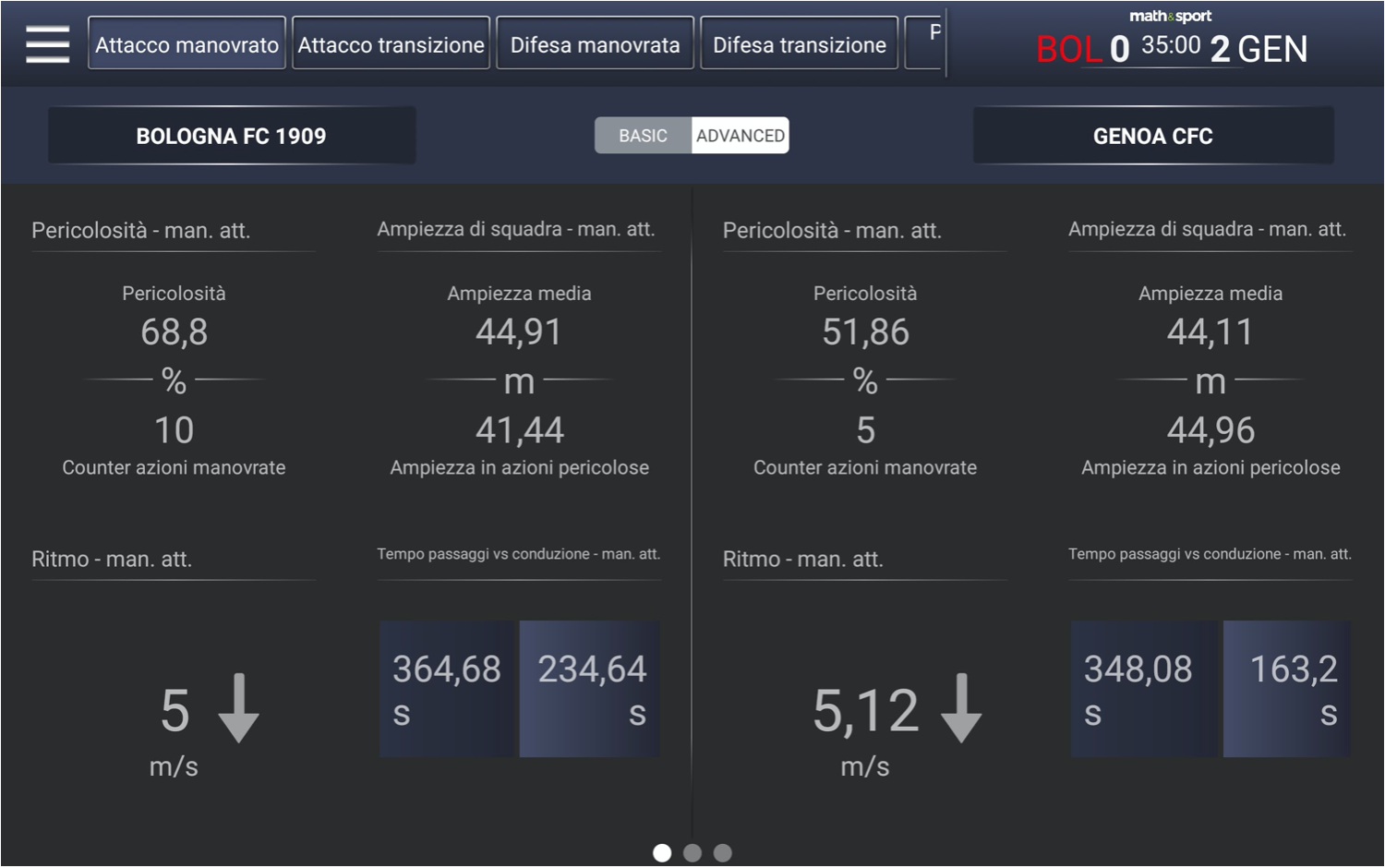 This allowed Genoa to take courage and get out of his shell, increasing its number of maneuvers plays. The comforting data then pushed the Genoa staff to further raise the center of gravity and that led to the Sanabria goal which ended the first half on 0 to 2. 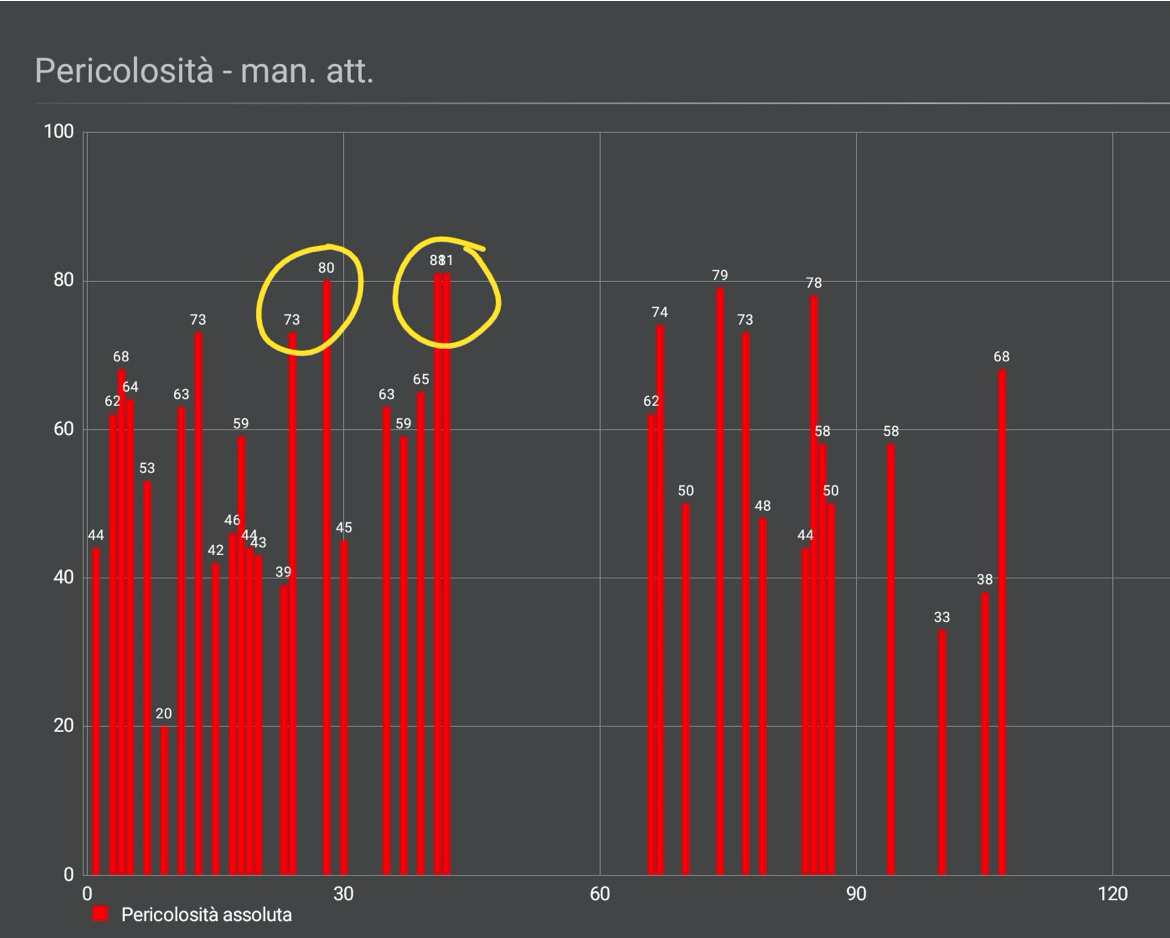 In the graph it is possible to see how the dangerousness of Genoa’s maneuvered actions had peaked just moments before the goals, testifying a greater tendency to keep the ball and produce long actions that could hurt opponents.

During the second half, however, the staff of Mr. Nicola managed to intercept a first sign of fatigue of the team, forced in their own half by a Bologna in desperate search for the goal that would reopen the game. The data from the tablet, in fact, signaled the beginning of a dangerous reduction in the team’s size, caused by a rise in pressure from Bologna, which was closing Genoa in its own half-court.

Specifically: the graph of the maneuvers actions related to the KPIs on the Genoa amplitude, showed a steadily decreasing trend, action after action, while that of Bologna recorded the maximum effort of Mihajlovic’s team. 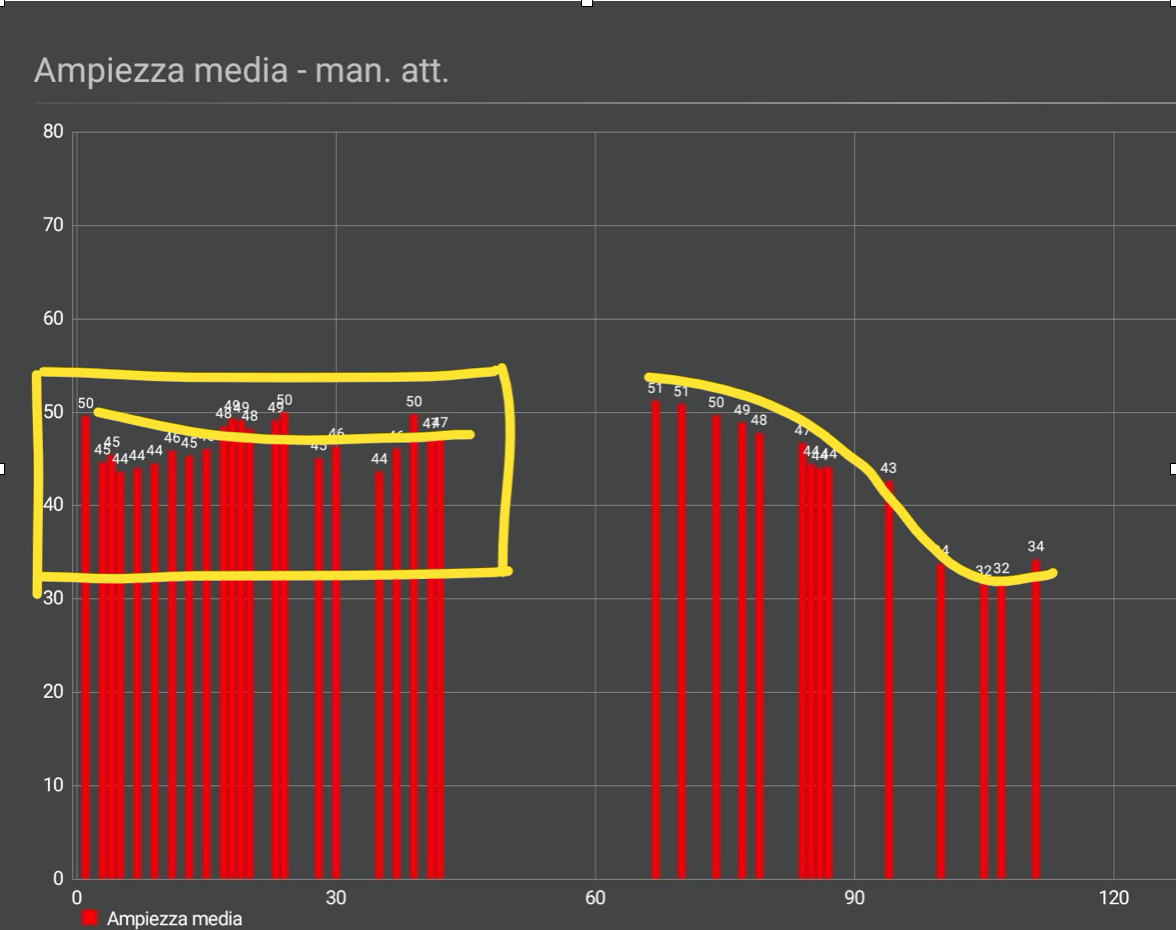 This data was in apparent countertendency with respect to the hazard indicator, which was instead higher in long actions.
The tablet therefore showed how the Ligurian team had all the potential to legitimize the advantage, and even increase it, if it managed to keep the ball to produce maneuvered actions. Nonetheless, he was suffering from the pressure of a Bologna that increased, minute after minute, the number of potentially dangerous actions, concentrating them above all in the central area.

Murgita, who follows the game in a privileged position to observe the whole court, immediately called the bench on the phone, signaling the trend registered by the tablet to Mr. Nicola who asked his wings to stay higher, to contrast the loss of width by the team.
Also during the second half, Virtual reported that Sanabria, in the comparison with Pinamonti, the other rossoblu striker on the field, had decreasing tendencies both in the availability to receive the ball and in the pressure exerted on the opponents.

Nicola was thus able to intercept the decline of his player from the very first signs, and to encourage him to try to match Pinamonti’s effort. Although Sanabria was the author of the second goal, his work rate was falling, threatening to send the team into suffering, and the coach had finished changing due to Pandev’s premature injury. 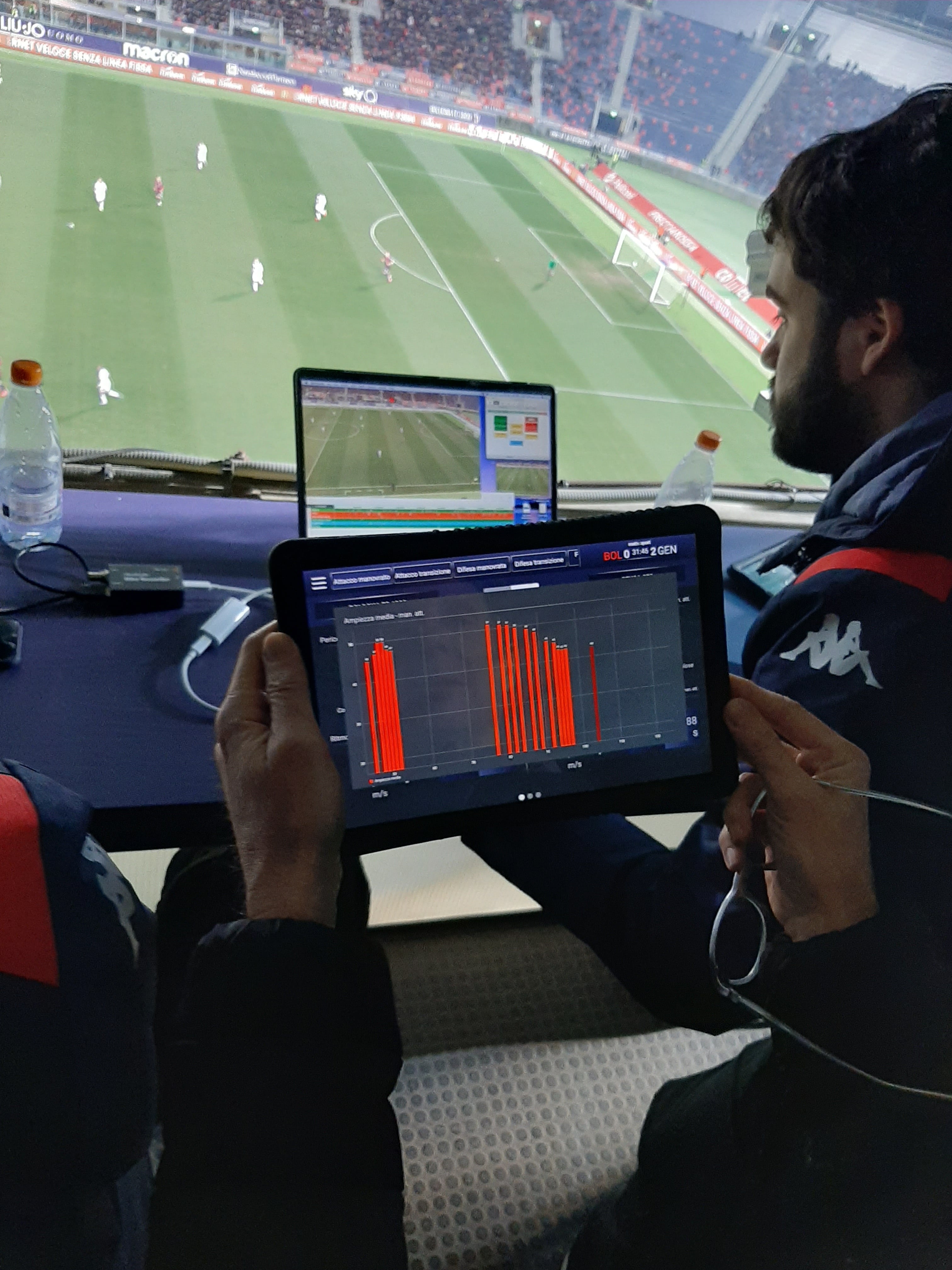 Adjustments to the tactical disposition that led the team to gain the penalty of the definitive 0 to 3, also thanks to a lowering of Bologna game rhythms.
Drained by the effort, Mihajlovic’s team continued to have a tendency to lead a lot of the ball, especially with maneuvered actions, thus leaving a lot of room for the Genoa counterattacks.

The case of Bologna – Genoa is certainly among the most interesting, with both staff making real-time use of the Virtual Coach’s readings. On the Genoa’s side the telephone communication between Murgita and the bench, has repeatedly reported the tablet alerts to Nicola’s ear, on the Bologna’s side the staff decided to take it even to the locker room during the interval, making available to the coach Mihajlovic further statistical reading keys to understand what had gone wrong. The Sinisa staff, who had taken possession of the tool a few hours before the game, showed particular interest in its potential and in particular in the customization processes that can be modulated on the needs of a punctilious coach like the Serbian.