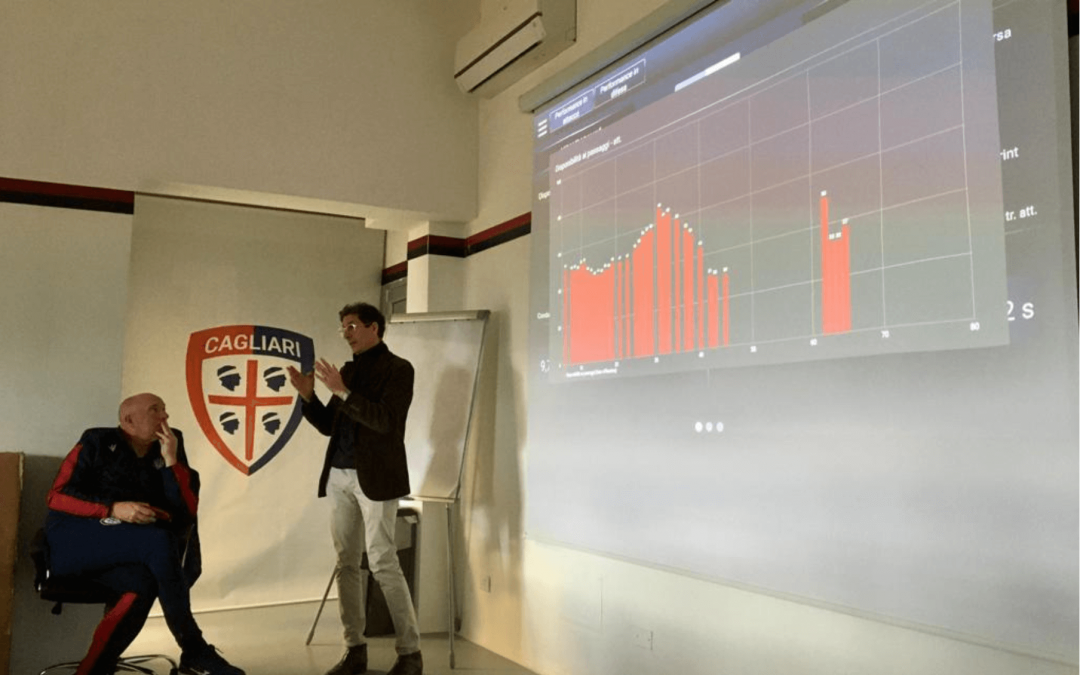 Football Virtual Coach is an absolute innovation in the international football scene and is an instrument in line with FIFA’s strategic plan for the development of football, witch its president, Gianni Infantino, has recently express to the public.
The top FIFA manager has indeed outsourced the 11 fundamental points of “Vision 20-23” his ideological manifesto designed to make the football of the future a truly global sport. Among the points considered essential to bring it to new frontiers, in addition to issues such as: the modernization of the regulatory framework, the increase in global competitiveness and the impact of football on society, there is also a renewed attention to the role of technology, through the implementation of new tools aimed at improving the fan experience and the overall quality of the game.
A trend also confirmed by the words of some great Italian executives, first of all Andrea Agnelli: “We then want to explore the terrain of new technologies, in particular that of artificial intelligence to understand how it can impact on training methodologies and I have the maiximum confidence in Nedved, Paratici, Marco Re and Giorgio Ricci who are entrusted with the organizational leadership of Juventus “.
It’s not surprising the great attention that the highest representatives of national and international football are devoting to our project. FIFA, in particular, has sent Daniele Diana, Football Innovation Manager, to attend the meeting between Bologna and Udinese to observe the potential of our tool in action.
Diana wanted to talk to the team staff at the end of the game to understand the real impact, recording the request for further efforts to explore all the customization possibilities, as reported by the Bolognese Lamberti: “we must adapt it to our game module and system. It will give us a great help”
Diana went further: “FIFA is looking for something simple and intuitive that everyone can use and this product is really for us. We organize many short tournaments and the qualities of the Virtual would allow us both to provide all teams with a very advanced and immediate understanding tool, and to be customized in relation to the number of analysts that a great team can have “

Among the numerous teams that have been pleasantly impressed by the Virtual Coach and who are studying all possible customizations, it’s impossible not to mention Mr. Gotti’s Udinese. The first contact with the Friulian club took place with the complete staff e and in the presence also of the sports director Marino, who wanted to touch the potential of the tablet personally.
In particular, the coach of the Friulians said he was very interested in personalizing the data relating to the ability of his forwards to defend the ball from the pressure of the opponents at certain moments of the game, because his game relies on the ability of Okaka and Lasagna to protect the ball to pick up the team.
During the Bologna – Udinese match, the Bianconeri were able to discover the accuracy of the Virtual Coach’s findings, who, around the middle of the first half, signaled that Stefano Okaka was particularly active and that his availability to play with his companions could create problems to the defence of Bologna. 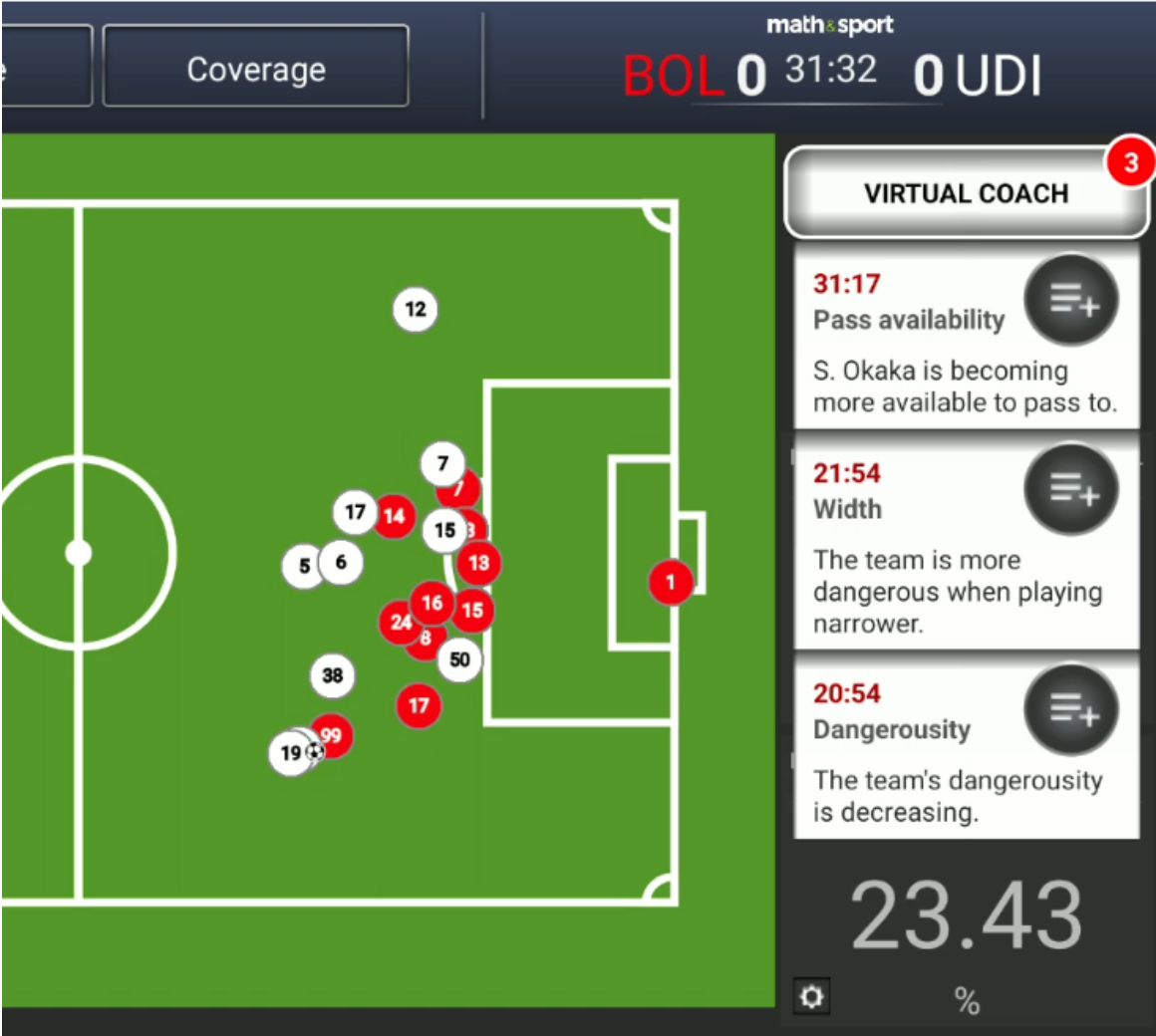 An alert, visible on the screen at the top right, warned the staff of the increase in real time, encouraging the team to intensify the number of balls leaning towards the attacker.

A few moments later Udinese unlocked the game, with an Okaka header.

Yet, the trend had been anticipated by a moment of decline on the part of Bologna, also signaled by an alert, which allowed Udinese to increase its danger.

At the top left you can see how the tablet had signaled the trend of a loss of offensive incisiveness by the home team in the 24th minute, which triggered a greater offensive momentum by Udinese. 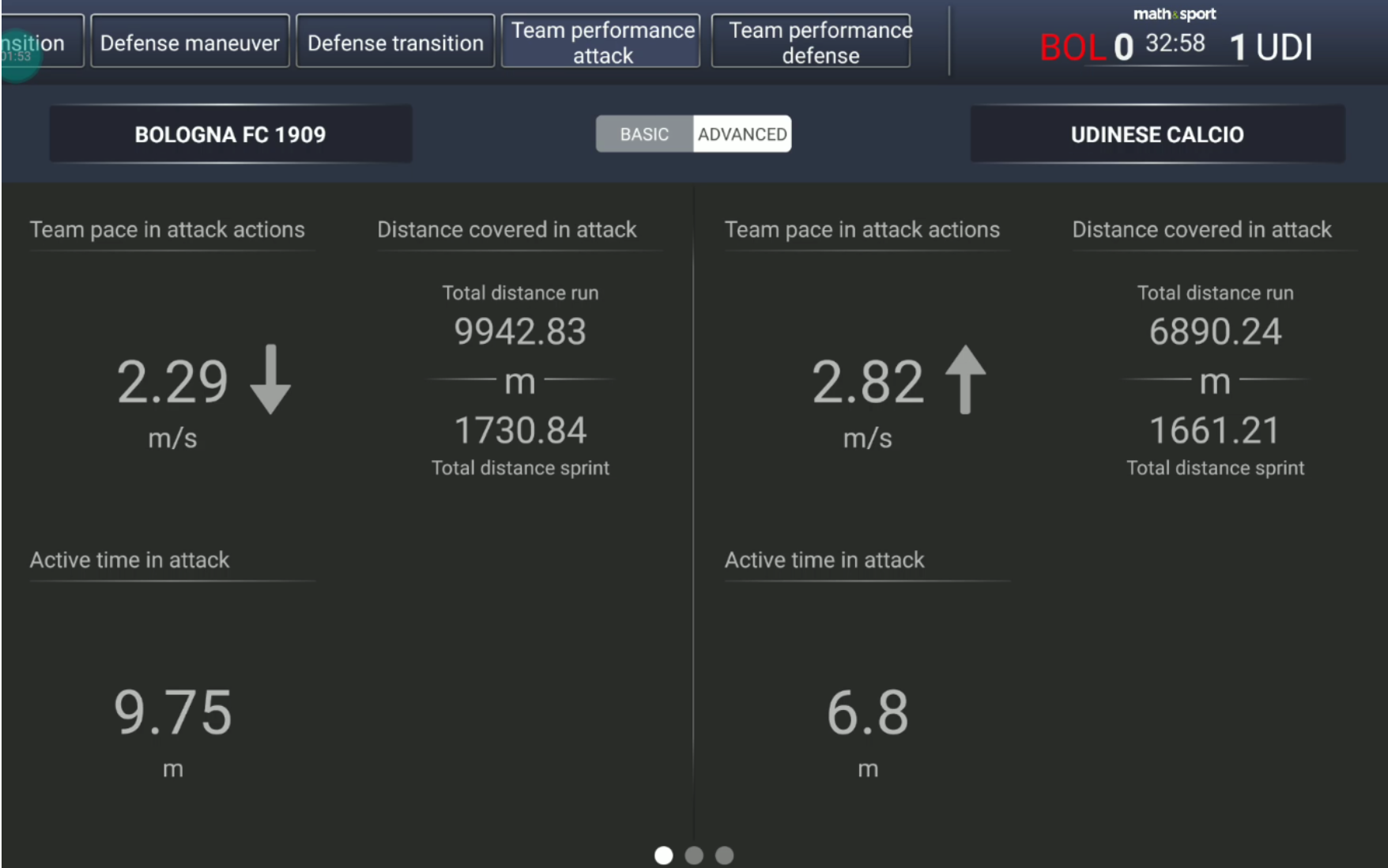 Bologna’s reaction to the disadvantage was vehement. As reported in detail in this screen, the home team had spent almost ten minutes of active time in the attack phase and ran almost 10 kilometers already at the 32nd minute, showing a great competitive spirit. The Friulians, for their part, despite having attacked for 30% less than the minutes and ran less than 7 kilometers had managed to score first 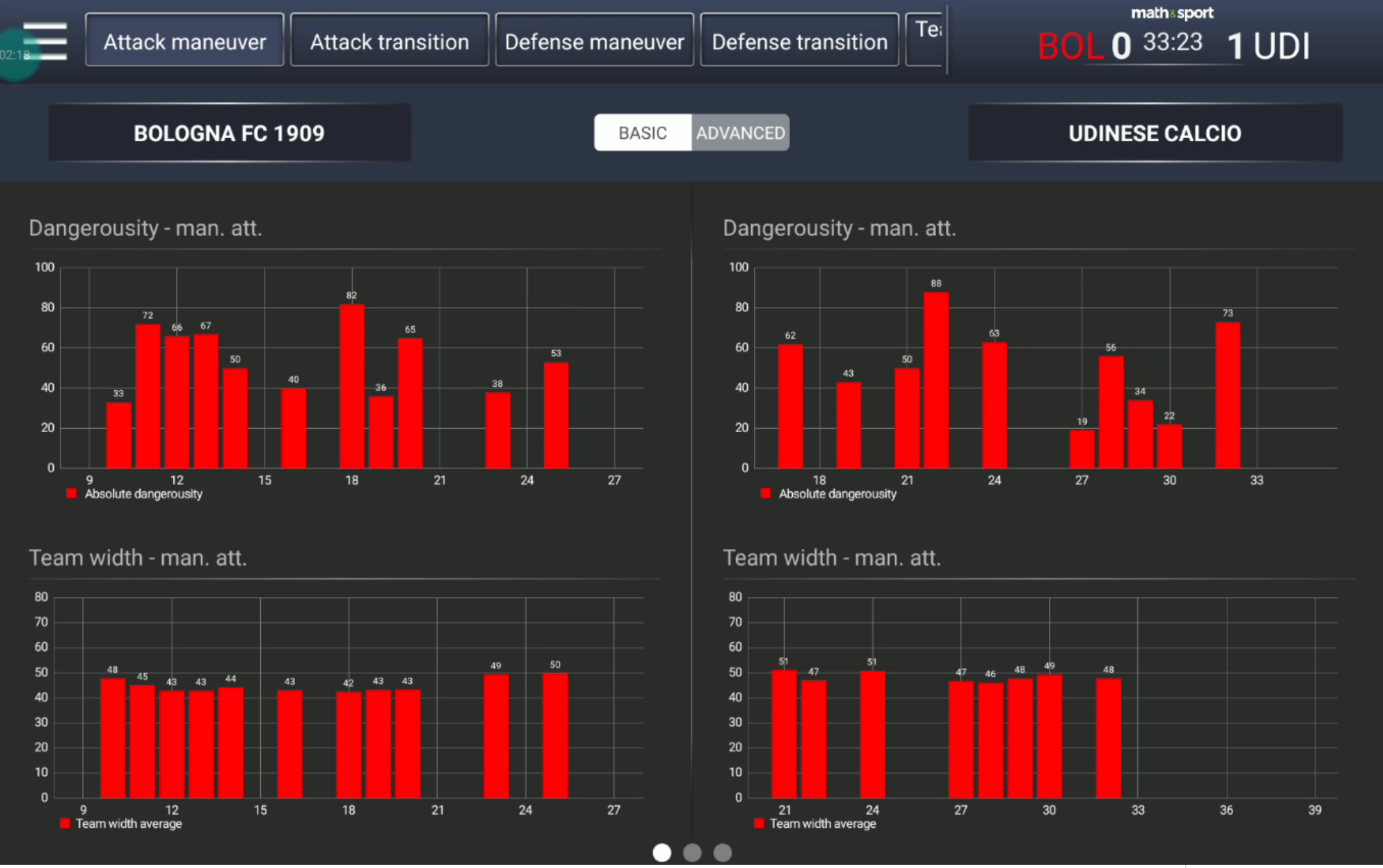 Despite the above differences, in fact, the distance of the meters run at maximum speed was very similar, a clear indicator of how Udinese was managing to be particularly incisive and how Bologna needed some precautions, because it was running a bit empty.

Part of the corrections could relate to the size of the Bolognese formation, because the data showed how, in the initial part of the game Udinese played with a width of 10% higher, greatly affecting the kilometers covered by opponents in the non-possession phase and on their consequent lucidity.
During the game, which ended with the final result of 1 to 1, thanks to Rodrigo Palacio’s goal in the very last seconds, both staff made extensive use of the tablet to write down tactical reflections and using the tactical blackboard to create graphics to be shown to the players, which Bologna was able to do even during the break, because it brought the instrument to the locker room.

The examples of the impact of the Virtual on the result of the matches, already in this pilot phase, are really numerous, even though it is still a moment of study and mutual knowledge between the staff and the tool.
Genoa – Lazio, of 23 February was among the selected matches and offered a large number of interesting ideas, also thanks to the excellent moment of the two teams, with Lazio launched at the highest top of the standings and Genoa back from the great win in Dall’Ara.

Genoa – Lazio saw the two coaches start with specular modules, 3-5-2, but applied with different principles. Lazio tried to obtain the maximum possible width on the outside, to widen the Genoa players and allow the insertion of the midfielders or the fifth who is on the weak side.

The trend, immediately recorded by Virtual in real time, was confirmed after a few moments of play from the gol, signed by Marusic with a cut behind the defense.

The numerical incidence of these dynamics was immediately reported to Nicola, also because in the course of the minutes it increased.

In fact, the parameter circled in red shows the amplitude in the dangerous actions, a very relevant figure in this beginning of the white-light blue game.

Given that it perfectly reflected the course of the court, since, in addition to the goal, it was precisely the insertion behind the defenders, it created great dangers to the defence of  Genoa . In the specific case of the graphics, the rear was forced to knock down Lulic with a warning foul.

After the Lazio advantage, the tablet also signaled an increase in the incidence of Luis Alberto in the willingness to play the ball between the lines.

Genoa therefore immediately chose to reverse the position of the two central midfielders Schone and Behrami, whose performance indicator suggested an adjustment to clog the favorite areasof the Lazio playmaker.

However, Mister Nicola has decided to change form in the second half, moving to a 4 defense thanks to the lowering of the two external players on the line of the defenders.

The new backward position of Criscito and Cassata has significantly increased their willingness to play the ball with their teammates, relieving them of a little pressure.

This wider disposition of Genoa, gives breath to the maneuver and generates a second more open and spectacular half. Testified by the 4 goals scored, two on each side, and by the standing ovation that the rossoblu have received from their audience despite the final defeat by 3 to 2.

To these first examples of practical use of the Football Virtual Coach, we must also add all the feedback received during the meetings with analysts and coaches, which have shown a very high interest on the instrument, especially with respect to the great adaptability to the specific needs of the staff, an aspect on which all teams insist on investing time and resources.
The pilot phase serves precisely to create a dialogue between the tool and the staff, to create a bridge between the two entities that transforms real-time numerical analysis into an important resource for field choices.

Equally fascinating, in this first phase of approach to the tablet, is the process of “translation” between the two languages, that of the field and that of data, which are both tools for telling a single truth, that of the coach. One of the most interesting parameters recorded by the tablet, for example, concerns the willingness to receive a pass from a player, that is, how much he puts himself at the service of the team, trying to be at the center of the game.
Our engineers, to offer staff a complete view of the potential of this survey, went to isolate video clips of the game, directly relating the data to the imagines.

You are also interested in the analysis of the physical parameters of the players, and by Mr. Maran, who were able to observe with pleasure the punctuality of the data recorded by the tablet, compared with the image of the field in real time, and recognized its incredible immediacy .
“This is the future” commented Mr. Nicola and Mr. Ancelotti in chorus, and it is not difficult to understand why. An opinion shared by many of the professionals involved in data analysis, from Fabrizio Preti (technology director of Rome), to Luca Trucchi (Atalanta) and Federico Cerasaro (Lazio).
The pilot phase continues, to offer all teams a first contact with the potential of the tool. Davide Gallo, of the Antonio Conte staff, revealed that: “it was in our plans to try to develop something that worked on these data, finding them ready and customizable is a great advantage.”
Other signs of shivering waiting have been recorded by practically all the staff, from Sassuolo to Rome, from Sampdoria to Verona, who are waiting for nothing more than to be able to explore the potential of the instrument as soon as possible.
The pilot phase, therefore, proceeds rapidly, recording excellent results and the absolute satisfaction of those who have already started using it. The value of the data collected in a customizable way is such as to have stimulated even an interesting dialogue between Maran, the coach of Cagliari and Carli, the Sardinian sports director.
Maran said he was impatient to use the tablet to monitor some of the players’ movements, starting from his particular and unique idea of ​​football, in order to understand which ones are best suited to his form. An algorithm built on Maran’s ideas could allow him to further refine his way of training, increasing his impact on the dynamics of the field. 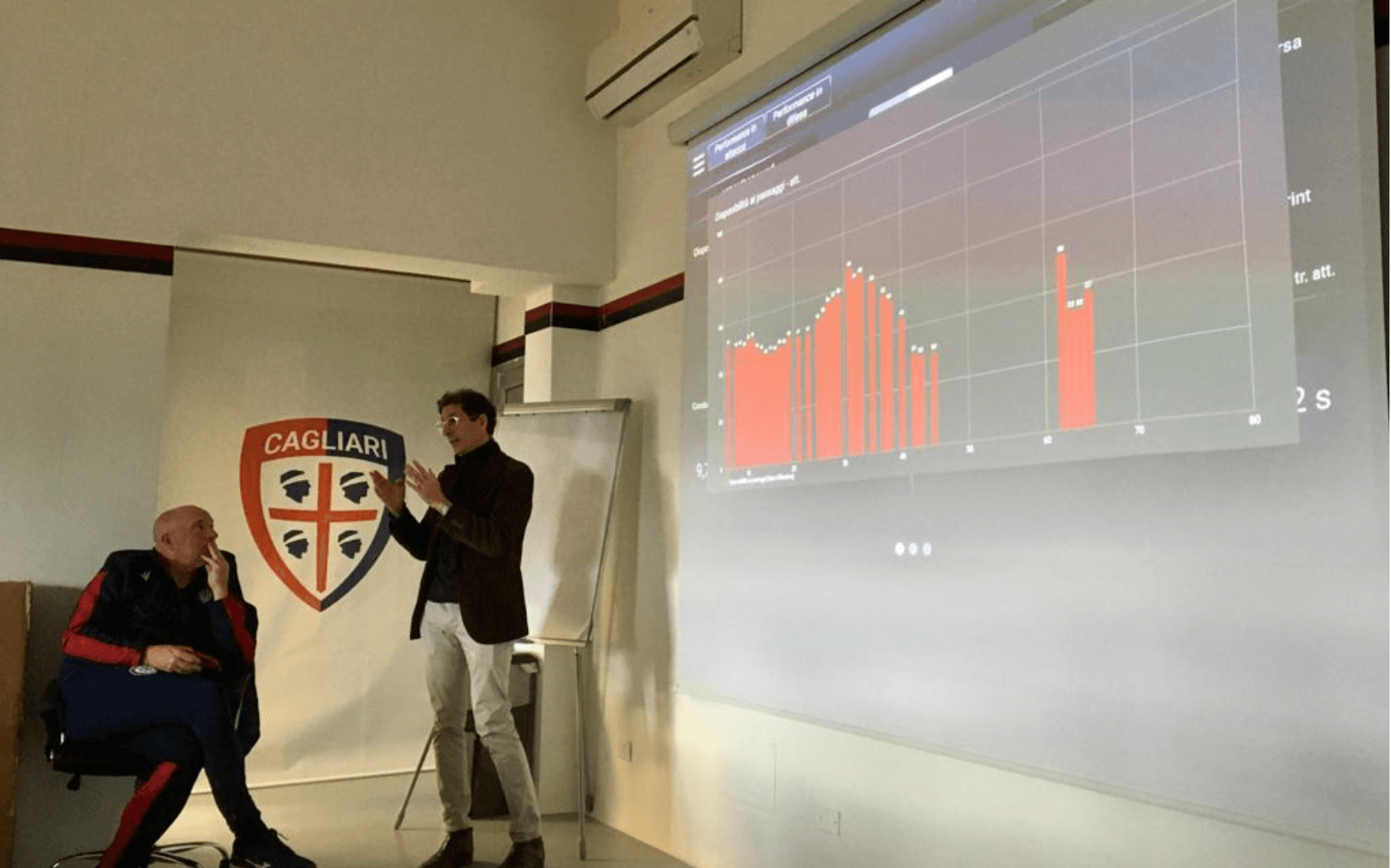 “What the coach does with the Cagliari shirt remains the property of Cagliari though!” Carli replied with amusement, opening a reflection that explains well the high opinion that professionals have on Football Virtual Coach.
“My way of seeing football is mine, you can’t give it to the next Cagliari manager” was the answer, also amused by Maran, who can already be defined as jealous of his instrument customizations.

There are still some steps to be taken to achieve complete adoption and autonomous management by all the Football Virtual Coach teams, but the first contacts are absolutely positive, above all, and this is perhaps the greatest pride in aim of transforming it into an instrument of which every coach feels fully owner.
Finally, it is important to underline with satisfaction the robustness demonstrated by the tool, which has always been able to supply data in real time with punctuality, in a constantly updated flow with success both in uploading (from the video-tracking system) and in downloading. All quickly integrating with the Lega’s existing resources, from SportVu to Netco’s infrastructure.